Its winter here in South Africa, we are having a good cold spell, I say good because often our winters can be too warm and at least we can now make a lovely log fire on days like this.

I was looking through my collection of cards from many years ago. I love those delightful character animals by Noel Tatt. I have quite a collection of them and will show you a few one day. Today I singled out two of my favourite original watercolours depicting a lovely summer's day in the country, a summer in my winter. 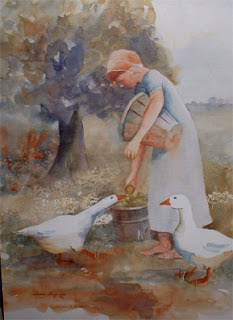 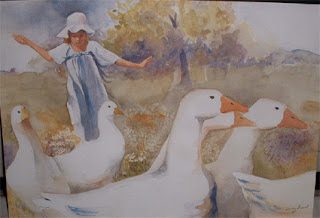 Posted by Scallywags Scribbles at 8:44 AM 1 friends said 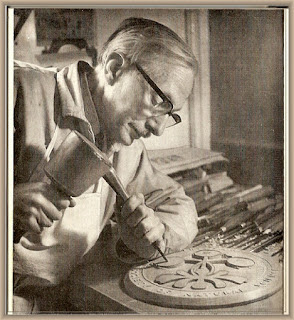 Well I have never played this game before, so forgive me if I get this wrong.

I was tagged by Lana Manis of Honeysuckle Lane, her wonderful website and well worth a visit and her blog http://honeysucklelane.blogspot.com/, always something interesting to read and beautiful pictures. The above verse could have been written for Lana.
I am to open the book nearest me to page 28 and type an excerpt from it. On my desk at the computor is "The Friendship Book" of Francis Gay, 1974. I picked this up at a junk shop. Its a sort of year journal, a thought for each day with some wonderful pictures, interesting bits about her life encounters and warming quotes. Page 28 is most appropriate as it to do with crafters and a story about a bee keeper. (had to count the pages as they are not numbered).
Thursday April 25
"I have often meant to pass on this story.
I heard it from the beekeeper himself -the late Austin Hyde, a Yorkshireman who in his day was greatly beloved. He had a genius for telling tales and a genius also for making heather honey.
Austin Hyde's bees roamed the North Yorkshire moors, and he once told me that about five miles from his hives he was driving along a familiar moorland road when a bee flew in at the window and settled on his right hand.
Had that happened to me, I should have shaken it off in no time. Not Austin Hyde! "Why, you see," he explained to me, I kind of felt it was one of my bees; and as it was nearing sundown, I rather thought it was tired of collecting nectar, so, as it had thumbed a lift, I kept on driving till I pulled up at the hives, and in a minute I was out of the car, that bee went straight to one of the hives after a hummed thank you."
A charming story, surely?
But about that bee that "thumbed a lift"?
Did it recognise Austin, do you think? Or am I just being silly?
Now I have to tag two of you.
Pipberry Prims -I love her back to basic stories.
and
Carole's Country Store Blog -always such beautiful pictures to see and stories to read.
Thank you Lana, I enjoyed this.

Posted by Scallywags Scribbles at 1:04 AM 2 friends said 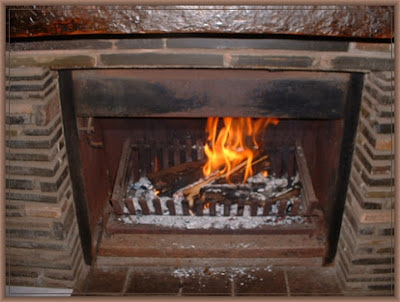 It is freezing outside, the wind is howling, there is snow close by and yet we were as snug as a bug. Its was a wonderful Tuesday meet today, sitting in front of a log fire, warming our toes while we stitched away and chattered and laughed together. I just wish everyone could have been with us. There is no more cosy a picture than a log fire enjoyed by friends.

Posted by Scallywags Scribbles at 4:00 AM 3 friends said What a mouthful!. This is my latest make-do, a pineapple pincushion. Hand quilted, took me ages and I almost gave up, aged, baked to give it that prim look. I starched and aged the leaves so that they kept their shape. The pineapple stands on a lovely old hand carved candleholder, this piece of wood inspired me to make a pineapple because of its carvings.

The pineapple and leaves are made in a lovely textured wool fabric and stuffed with old wool bits to keep your pins safe. The pineappple sits on a nest of natural coir.

One of a kind, original design by Whimsical Prims -a prim on a whim -for sale -email me if you are interested.

Posted by Scallywags Scribbles at 9:31 AM 0 friends said 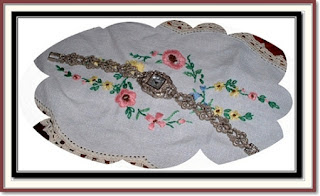 I love old jewellery, especially marcasite. It reminds me of my mother and my gran. As a child when we were feeling poorly, we were allowed to "play" with the jewellery box. This box was a blue padded empty chocolate box with a blue tassel. Inside was my mum's collection of jewellery, bits and pieces, mostly no longer worn, bits from her mum, many were marcasite. These were my favourite, their sparkle and intricate patterns fascinated me, they always looked so "rich" and I could imagine the ladies who would have worn them to fancy tea and dinner parties.
Today's Marcasite is inspired by the late Victorian era and early Edwardian/Art Noveau period.
Above is one of my first peices or Marcasite, with a mother of pearl watch face.

Its been a while since my last Wednesday Wander or treasure hunting. On my recent trip, I found some wonderful bases for pincushions and can't wait to get started on these.

I just love pincushions and have quite a collection now. I have been reading up a little history on pincushions, did you know that the first "pins" were sharp thorns and fish and animal bones?

They were generally kept in a case made of soft animal skin.

Pin-stuck pincushions were the rage from the 17th century and were more decorative than useful. Their decoration was made up entirely of pins and the pins could not be removed without spoiling the pattern of the decoration. These held great social significance and were used in courting, marriage and maternity.

Here are some of my earlier pincushions which have found homes all over the world. 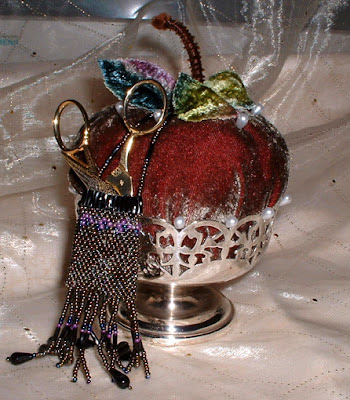 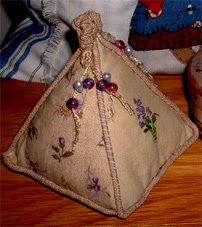 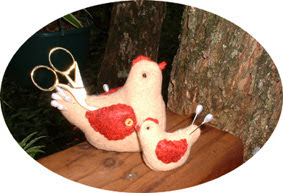 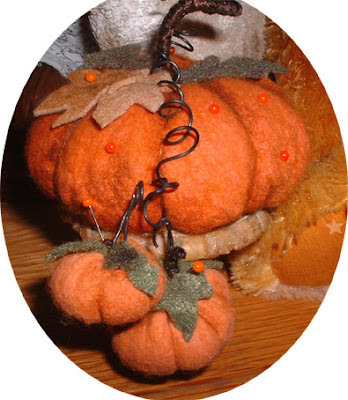 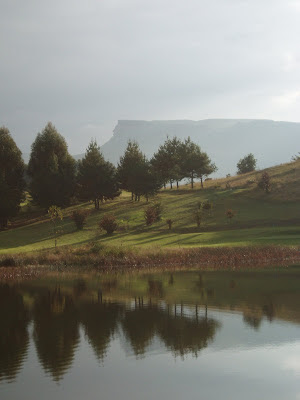 Its been a rough past week with mum in hospital. Fortunately things are finally coming right, and the next few days will tell. I just can't wait for mum to be out of hospital, its funny how one takes things for granted, everyday little things that are only appreciated when taken away from one. "Count your blessings" is a saying that could never be more true for me than now.

What's new in my little shoppe, mother Hubbard's Cupboard.
Well its bottles and baskets this week. I was thrilled to find some olde milk bottles, these are great for decor or to use as a milk bottle, great pourer and embossed cow. The price is R20 per bottle. 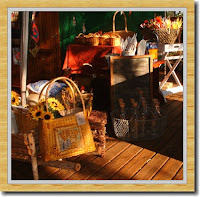 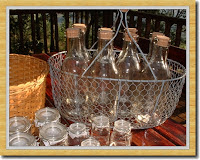 Posted by Scallywags Scribbles at 7:12 AM 0 friends said 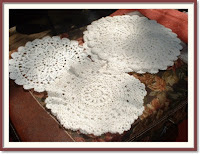 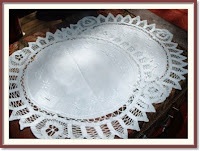 Clearing out the linen cupboard today, I decided to thin out some of my collection of the past 45 years, most of which has never been used. Do folks still use doilies?? I have traycloths, embroidered and plain, a runner, crochet cushion covers, doilies a plenty, lovely delicate hankies, and a beautiful tea cosy.

If you are interested in any, please email me for prices.

Posted by Scallywags Scribbles at 7:34 AM 1 friends said 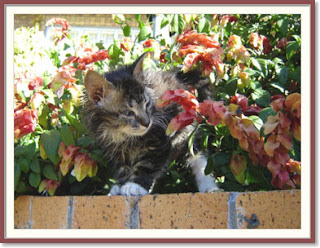 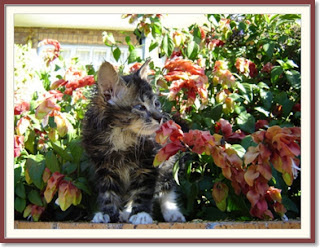 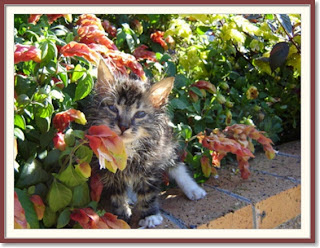 Just got to share these photos of a new kitty from a friend in Cape Town. Isn't it just adorable, how can you resist.

What absolute bliss! Thanks Ron for sending. 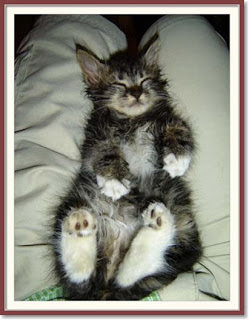 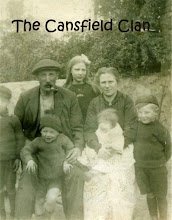